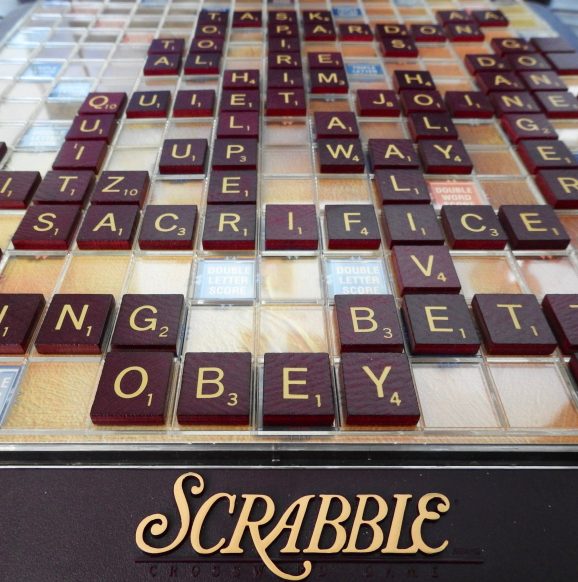 A game of Scrabble taught me a lesson

A favorite pasttime for me is to play Scrabble. I used to play online against friends and total strangers through a game site, but after playing about 30 on-going games a day and impatiently waiting for my opponents to take their turns, I realized it had become an addiction. So I wisely made the decision to stop playing other people online. But, there was still the option of just playing against the computer when I had the time. I couldn’t quit Scrabble cold turkey!

One recent morning I took the time to play a quick game. Then I decided to play a second game, when I felt the “nudge” to stop and have my devotional time. Well, I chose to play just one more game, and within minutes the computer was creaming me. I reasoned, “OK so the Lord is trying to get me to stop playing.” I thought surely I could just finish this losing game. Guess what the “computer’s” next word was….OBEY. So, I obeyed.

When we feel that nudge from the Holy Spirit, there are 2 choices to pick from: either ignore it and do your own thing, or listen to that still small voice and respond. When you listen and obey, I can promise you that because of your decision, you will find joy in whatever the Lord is trying say to you. He is at work. To be a part of whatever He is doing is far better and more fulfilling than to ignore His whispering and pretend you didn’t hear Him. Ultimately it’s more stressful since you will be riddled with guilt for choosing your own way and not listening and obeying His voice.

Remember Jonah? He heard the Lord’s voice and was even told what to do, but he chose to ignore it and went another route. Did God just let him go? No. He pursued Jonah in a pretty vigorous way until the prophet agreed to obey. I am not saying this will happen every time and to you, but if the Lord is asking you to do something, realize that He knows you very well, and knows just what buttons to push. He has a plan, and it involves you! That should excite you!

Jonah 3:1-2 “Then the word of the Lord came to Jonah the second time, saying, ‘Arise, go to Ninevah, that great city, and call out against it the message that I tell you.’ So Jonah arose and went to Ninevah…”

1 samuel 15:22 “And Samuel said, ‘Has the Lord as great delight in burnt offerings and sacrifices, as in obeying the voice of the Lord? Behold, to obey is better than sacrifice, and to listen than the fat of rams.'”

Food for thought: How do you recognize the Holy Spirit’s nudging, or the still small voice of the Lord?

Fun fact: The original version of Scrabble was invented in 1933 by an architect named Alfred Mosher Butts. He studied the front page of the New York Times to determine which letters were used more or less frequently which led him to decide the value and number of each of the game tiles.