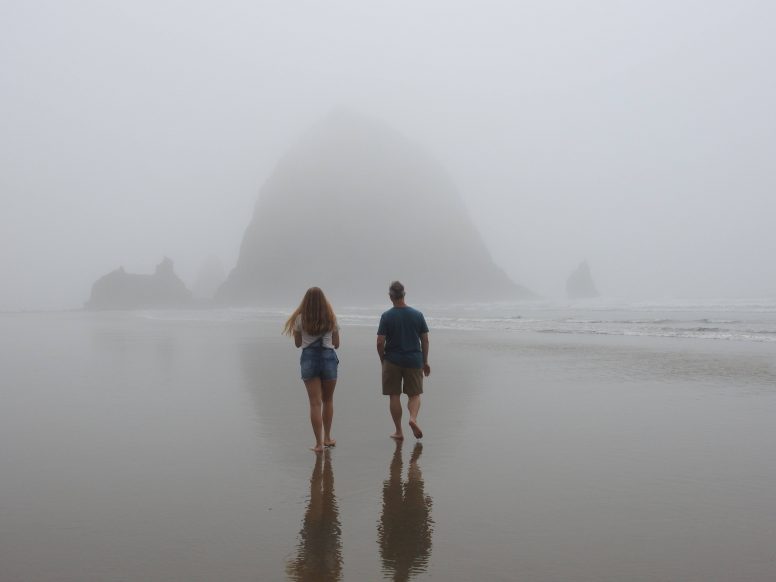 Fog creates a sense of mystery, fear and hope

Fog creates a sense of mystery, fear and hope because it hides everything around you. Our family experienced this last summer during a trip out west that included a visit to Cannon Beach, Oregon to see the infamous Haystack Rock. When we left Portland, it was perfect weather and visibility was 100%. When we arrived at the beach, a heavy dense fog had set in, enveloping everything around us. We decided to head out on the beach anyway, with the hopes of showing the kids this stunning rock formation. As we started walking, it was difficult to see even 100 feet in front of us! We could make out slight shapes of several other people walking around, but the air was completely grey. We could hear the waves washing on the shore, but couldn’t see the water. As we walked toward the sounds of the waves, we realized that the sky, the water and the beach were all the same color: grey. It was very difficult to distinguish what started where or ended where.

We chose to continue our walk in the direction that we knew the Rock was. The unknown of would we actually be able to see it when we got there was on our minds, but the beauty and mystery of seeing only the eery, monotone fog surrounding us on all sides filled us with awe and wonder. It was nearly a mile journey in the thick fog, and it was strangely quiet too.

As we got within 1/4 mile of Haystack Rock, a large darker shape became barely visible. The closer we got, the slightly better we could see the shape and some details of this Rock. It wasn’t until we were standing directly in front of it on the beach that we could see it and appreciate this wonder, but it was still shrouded in a fog. But now we could see the hundreds of other people that had taken this same journey to witness the beauty of Haystack Rock. Slowly, the fog began to diminish and lift. Only then could we fully appreciate the awesomeness of this landmark, the birds that were nesting on its edges and the lush green moss. We were not disappointed!

It is the same with our life. Some days we will have a clear vision of what is ahead for us, and other days there will be a dense fog in our lives, where we won’t be able to see what is really around us, or not know what the future holds. For some, their entire life is clouded with doubt, with not even knowing if there is a God!

But, we had heard about this Haystack Rock from others that had witnessed it and seen it, had been there already, and on their word and testimony we chose to walk toward the rock on that shrouded morning.

Those of us that follow Jesus are not blind or blinded, but are trusting in the true testimony of others that have witnessed Him. We are in faith walking toward Him too, hoping the fog or veil of this life will lift, and that we will meet Him face to face.

It’s a journey of mystery, trust and of hope.

He does give us glimpses of Himself as we walk along, by answering our prayers, by showing us His hand in our lives, by letting us witness how His creation ebbs and flows at His command. We know that the trials in our lives, a fog as it were, are temporary, and that there is a sun and Son above it all. We just need to have faith and enjoy the journey until we reach our destination, the one called The Cornerstone, our Rock.

Psalm 61:2 “from the end of the earth I call to you when my heart is faint. Lead me to the rock that is higher than I.”

Food for thought: When your path is unclear, do you ask for directions, do you try to solve it on your own, or turn around and just give up?

Funny fact: The Atacama Desert in Chile is one of the driest areas in the world. It does however experience frequent fog which moves in from the coast, which the locals call ‘creeping fog’. Large nets are used to catch the fog with tiny 1mm openings accumulating the tiny water droplets which drip off into a gutter which collects the water.