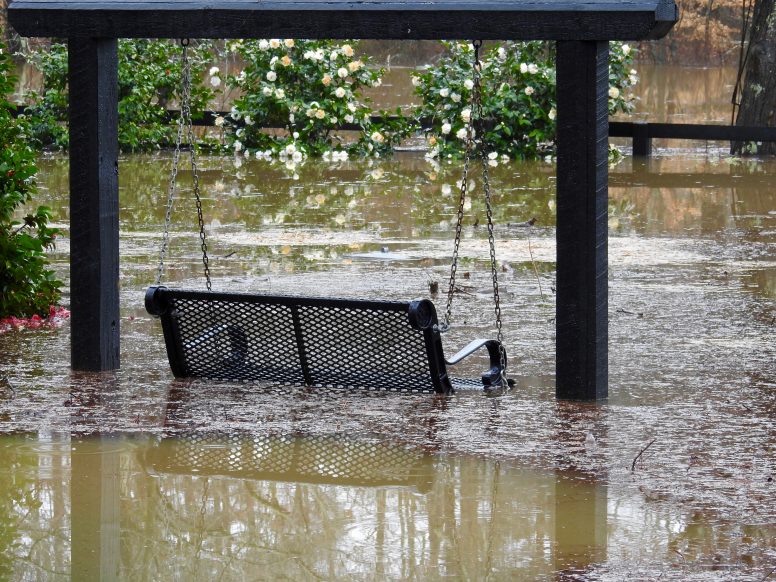 Floods vs. your “home’s” foundation

Here in Georgia, we are blessed with an abundance of spring rain which causes tremendous flooding. This excessive water can have a hazardous affect on the foundation of homes. If there is a basement, it will seep through the cinderblocks causing dampness which leads to mold, or perhaps it creates an unwanted indoor swimming pool downstairs! If there is not a basement, the rains remove the dirt from around and under the house getting get washed away, weakening the foundation slab, eventually cracking the concrete slab due to the pressure of uneven poor support beneath it.

What is your life’s foundation? Is it a religion that you grew up with? For many of us, we were raised in a christian home, attended church and knew of Jesus. But it wasn’t very personal. It was more head knowledge than heart knowledge. This didn’t translate well when we became adults, and our childhood faith fell away. When the reality of life hit us, the Lord was no longer a viable known source of help in our time of need. That is because we didn’t have that strong base of personal faith in Jesus Christ in our life. As a result, we caved in to the ways of the world by becoming more like it and less like the standard that God gave us through Jesus.

Christianity is: a personal relationship with Jesus Christ the Son of God based on faith and fact of His resurrection, lived out by following Jesus’ examples, with the promise of eternal life with God after physical death.

Do you see the difference? One is pretty weak and fickle, the other is strong and steady. One is based on fiction, the other is based on fact. Religion is usually taught, but Christianity is a genuine, heavenly relationship, a way of living without fear or regret because of who we are to God in Jesus’ name.

In today’s world, our culture of religion is always shifting. It has become good and politically correct to include all religions believing them all to be God-fearing. The truth of abortion being murder is more about the mother and less about the infant life. The truth of marriage being sacred is more about if it feels good or no longer does, and less about everlasting, persevering love. The name of God is used as a curse word instead of being praised. In Christianity, our faith is getting watered down and thinned out. As a result, many “christians” have a righteousness that is on the surface, but they cannot live up to God’s standard of righteousness, which is much deeper.

They just might hear, “And I will declare to them, ‘I never knew you; depart from me, you workers of iniquity.'”
Matthew 7:23

Think about the homes that are beachfront properties. For those houses to withstand the flooding caused by massive waves and the winds, the builder had to dig down past the initial layer of sand. Even if the builder goes down two feet, that is not deep enough to support the weight of the home. It would eventually sink down, and collapse. So the builder has to dig down deep enough until he hits the rock bed. That deep bedrock will give him the stability needed for his home to remain anchored and strong.

What is the foundation of a believer in Jesus Christ? The fundamentals of our faith: 1. God is our Creator, 2. Jesus is the Son of God who came and died on our behalf, was raised from the dead, and sits on the throne of God and will one day come again, 3. the Holy Spirit has been sent to fill us, teach us, comfort us, and intercede for us.

“But God’s firm foundation stands, bearing his seal: ‘The Lord knows those who are his’, and ‘Let everyone who names the name of the Lord depart from iniquity.'”
2 Timothy 2:19

If we stand strong in those core beliefs and seek God’s will, praying to the Lord and worshipping Him alone, with our lives centered around the written Word of God while striving to live and love like Jesus, there is nothing can come against us that would bring down our spiritual house. Nothing. NOTHING.

“For he (Jacob) was looking forward to the city that has foundations, whose designer and builder is God. By faith…”
Hebrews 11:10

Food for thought: Rain represents blessing; it brings new life and growth. Floods represent a cleansing, a washing away of the old and starting new. Remember that above the storm clouds the sun is still shining! Jesus sees you, knows you, and loves you through it all. Keep your faith strong in Him for He is your foundation.

Fun facts: Residential beachfront homes’ foundations are called Piles, but are also known as Stilts or Piers. They are the support posts that go down anywhere from 20′ to 60′ deep, depending on the soil and depth to the bedrock.

NOTE: I am always looking for a testimony to share on SnapInspire!
If you have a God story, please email me: Kari@SnapInspire.com.