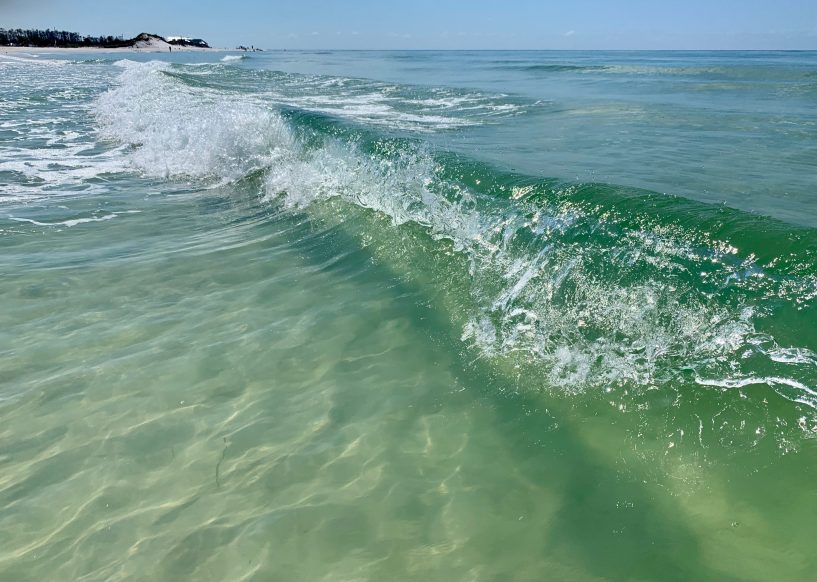 “…I will question you, and you make it known to me.

“Where were you when I laid the earth’s foundation?
Tell me, if you understand.
Who marked off its dimensions? Surely you know!
Who stretched a measuring line across it?
On what were its footings set,
or who laid its cornerstone—
while the morning stars sang together
and all the angels shouted for joy?

“Who shut up the sea behind doors
when it burst forth from the womb,
when I made the clouds its garment
and wrapped it in thick darkness,
when I fixed limits for it
and set its doors and bars in place,
when I said, ‘This far you may come and no farther;
here is where your proud waves halt’?

“Have you ever given orders to the morning,
or shown the dawn its place,
that it might take the earth by the edges
and shake the wicked out of it?
The earth takes shape like clay under a seal;
its features stand out like those of a garment.
The wicked are denied their light,
and their upraised arm is broken.

“What is the way to the abode of light?
And where does darkness reside?
Can you take them to their places?
Do you know the paths to their dwellings?
Surely you know, for you were already born!
You have lived so many years!

“Have you entered the storehouses of the snow
or seen the storehouses of the hail,
which I reserve for times of trouble,
for days of war and battle?
What is the way to the place where the lightning is dispersed,
or the place where the east winds are scattered over the earth?
Who cuts a channel for the torrents of rain,
and a path for the thunderstorm,
to water a land where no one lives,
an uninhabited desert,
to satisfy a desolate wasteland
and make it sprout with grass?
Does the rain have a father?
Who fathers the drops of dew?
From whose womb comes the ice?
Who gives birth to the frost from the heavens
when the waters become hard as stone,
when the surface of the deep is frozen?

“Can you bind the chains of the Pleiades?
Can you loosen Orion’s belt?
Can you bring forth the constellations in their seasons
or lead out the Bear with its cubs?
Do you know the laws of the heavens?
Can you set up God’s dominion over the earth?

“Can you raise your voice to the clouds
and cover yourself with a flood of water?
Do you send the lightning bolts on their way?
Do they report to you, ‘Here we are’?
Who gives the ibis wisdom
or gives the rooster understanding?
Who has the wisdom to count the clouds?
Who can tip over the water jars of the heavens
when the dust becomes hard
and the clods of earth stick together?

“Do you hunt the prey for the lioness
and satisfy the hunger of the lions
when they crouch in their dens
or lie in wait in a thicket?
Who provides food for the raven
when its young cry out to God
and wander about for lack of food?

“Do you know when the mountain goats give birth?
Do you watch when the doe bears her fawn?
Do you count the months till they bear?
Do you know the time they give birth?
They crouch down and bring forth their young;
their labor pains are ended.
Their young thrive and grow strong in the wilds;
they leave and do not return.

“Who let the wild donkey go free?
Who untied its ropes?
I gave it the wasteland as its home,
the salt flats as its habitat.
It laughs at the commotion in the town;
it does not hear a driver’s shout.
It ranges the hills for its pasture
and searches for any green thing.

“Will the wild ox consent to serve you?
Will it stay by your manger at night?
Can you hold it to the furrow with a harness?
Will it till the valleys behind you?
Will you rely on it for its great strength?
Will you leave your heavy work to it?
Can you trust it to haul in your grain
and bring it to your threshing floor?

“The wings of the ostrich flap joyfully,
though they cannot compare
with the wings and feathers of the stork.
She lays her eggs on the ground
and lets them warm in the sand,
unmindful that a foot may crush them,
that some wild animal may trample them.
She treats her young harshly, as if they were not hers;
she cares not that her labor was in vain,
for God did not endow her with wisdom
or give her a share of good sense.
Yet when she spreads her feathers to run,
she laughs at horse and rider.

“Do you give the horse its strength
or clothe its neck with a flowing mane?
Do you make it leap like a locust,
striking terror with its proud snorting?
It paws fiercely, rejoicing in its strength,
and charges into the fray.
It laughs at fear, afraid of nothing;
it does not shy away from the sword.
The quiver rattles against its side,
along with the flashing spear and lance.
In frenzied excitement it eats up the ground;
it cannot stand still when the trumpet sounds.
At the blast of the trumpet it snorts, ‘Aha!’
It catches the scent of battle from afar,
the shout of commanders and the battle cry.

“Does the hawk take flight by your wisdom
and spread its wings toward the south?
Does the eagle soar at your command
and build its nest on high?
It dwells on a cliff and stays there at night;
a rocky crag is its stronghold.
From there it looks for food;
its eyes detect it from afar.
Its young ones feast on blood,
and where the slain are, there it is.”

“Would you discredit my justice?
Would you condemn me to justify yourself?
Do you have an arm like God’s,
and can your voice thunder like his?
Then adorn yourself with glory and splendor,
and clothe yourself in honor and majesty.
Unleash the fury of your wrath,
look at all who are proud and bring them low,
look at all who are proud and humble them,
crush the wicked where they stand.
Bury them all in the dust together;
shroud their faces in the grave.
Then I myself will admit to you
that your own right hand can save you.

“Who then is able to stand against me?
Who has a claim against me that I must pay?
Everything under heaven belongs to me.”
Job 38-41 (portions)