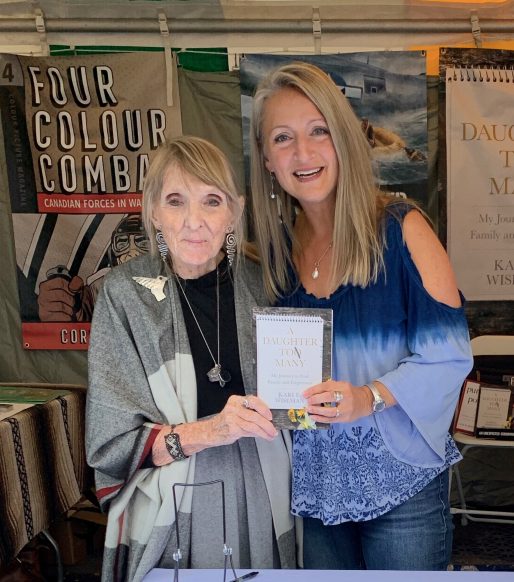 The gift of adoption

This last weekend I was in the 31st Annual Southern Festival of Books in Nashville, Tennessee. My publisher arranged for me to do book signings for a few hours each day.

On the last day, at the final hour, an elderly woman walked up to me, picked up my book, and asked, “What is it about?” This lady was the picture of class – from her jewelry and clothing to her demeanor – yet time had taken its toll on her body. She was hunched over from an arched back, her face lined with the years of life, and her hands showed the frailties of aging skin. Yet in spite of her body, her lovely spirit was contagious as she graciously smiled at me while looking directly into my eyes as though we had already known each other and were about to share a secret.

I hesitated in answering her question, but since I knew her time was limited and wanted to give her a tiny snippet of my story that she might appreciate, I said, “Well, I was adopted twice.”
She raised her thin eyebrows, smiled again, and said, “That means you were desirable!”
I was speechless. This thought had never crossed my mind – of course I knew the story and that I had been given up by my birth family and another adoptive family, which meant I was not wanted nor desirable. But she did not know my story. Perhaps she was trying to to be kind and find a positive response to a painful past. Regardless, it worked. Whether I believed it or not, those that had adopted me did want and love me, and that’s why they chose to adopt me in the first place. This special lady gave to me a gift – a positive twist with a generous reminder of how loved I was even through those difficult circumstances.

She bought my book and as she turned to walk away, she said it again, “Remember, you were desired.”

Sitting here this morning, our conversation kept replaying over and over in my mind. It spawned a parallel thought of our being adopted into the family of God. A verse that I cherished as a teenager came to mind:
“When my father and mother forsake me, then the Lord will take me in.”
Psalm 27:10

In God’s eyes, we are all desirable. This is the reason that He sent Jesus into the world! He wants us to have the opportunity to respond to His gift of adoption, something we cannot possibly earn, but is freely offered to each one of us.

Paul, a Jew and apostle of Jesus Christ, said to the church in Rome of whom most were Gentiles and not Jews,
“As indeed he says in Hosea, ‘Those who were not my people I will call my people, and her who was not beloved I will call beloved.'”
Romans 9:25

This is who:
“Yet to all who did receive him, to those who believed in his name, he gave the right to become children of God— children born not of natural descent, nor of human decision or a husband’s will, but born of God.”
John 1:12-13

This is how:
“..God sent his Son, born of a woman, born under the law, to redeem those under the law, that we might receive adoption to sonship. Because you are his sons, God sent the Spirit of his Son into our hearts, the Spirit who calls out, “Abba, Father.” So you are no longer a slave, but God’s child; and since you are his child, God has made you also an heir.”
Galatians 4:4-7

He did all of this because of his great love for mankind, for each one of us, regardless of our past. He did this because He wants us to become his children, children of God.

The why:
“He predestined us for adoption to himself as sons through Jesus Christ, according to the purpose of his will,“
Ephesians 1:5

Food for thought: The Lord calls us to Himself to become heirs and inherit the Heavenly Father’s blessings; of freedom, life, and sonship.
Have you felt Him stirring in you, drawing you to His heart?

Fun(?) facts: 1. Nearly 7 million Americans are adopted. 2. Unwed mothers advertised their babies for sale in newspapers in the early 20th century.
3. In the U.S. foster care, approximately 400,000 children cannot be returned to their families and are waiting to be adopted. 4. 90% of adopted kids have positive feelings about being adopted.