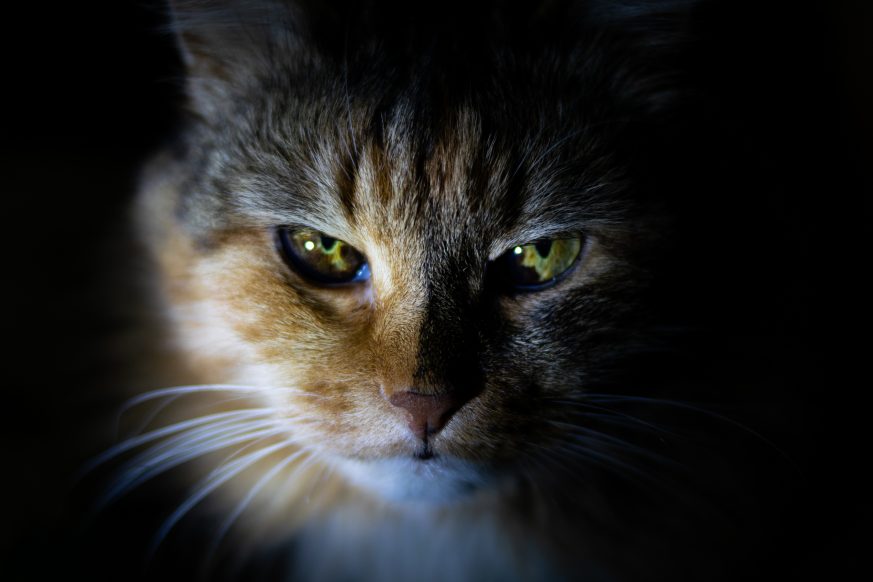 God has temporarily allowed Satan a power in this world, for a short time. Satan knows that his time here among us is short. He is limited by God though in what He can do, because God is over all things. We as believers must not ever forget that.

Have you watched a cat as it hunts or plays? It carefully, slowly, patiently stalks its prey. It might even sit completely still for an hour, waiting for the opportune moment to POUNCE and capture its prey. Cats are cunning, sneaky and smart. Well, Satan is like that.

In Luke 4, we read about Jesus being led by the Holy Spirit for 40 days in the wilderness. During this time, he ate nothing – he fasted. When his days there were ended, Satan came to him and tested his willpower. He tempted Jesus by appealing to his pride and hunger, and said, “If you are the Son of God, command this stone to become bread.” Now, if Jesus was a common man and did not have the Holy Spirit leading him, perhaps he would have given in to this enticing idea of proving who he was by creating some food for himself. Instead, Jesus quoted Deuteronomy 8:3, “Man shall not live by bread alone…”, while not allowing his pride to influence his hunger, nor subjecting himself to Satan’s wily ways.

Do you know what the evil one did after he tempted Jesus?
“And when the devil had ended every temptation, he departed from him until an opportune time.”
Luke 4:13

This doesn’t mean that Satan just left him alone from then on. No, he soon found opportunities to infect those around Jesus: he continued to throw curve balls by messing with his disciples’ faith, by speaking lies to the religious leaders, by whispering doubts in the ears of his family and neighbors, by using the priests to misinterpret the meaning and purpose behind the laws of God, by entering Judas to betray Jesus, by stirring up the crowds of one-time witnesses of Jesus’ miracles to then becoming a blood-thirsty mob.

The point is this: Satan didn’t completely leave Jesus alone after he tempted him and failed miserably, so don’t be surprised that he comes after you time and time again. He knows your weaknesses, and he knows how to push your buttons too! He waits until an opportune time; a moment of weakness, an emotional day, whenever or whatever it is that he can prey upon you with; to get you to stumble, or even fall.

No one is completely immune to what the evil one might send our way or put us through. But remember this: our Lord God knows all about it, since He had to give permission for these things to occur. But have no fear of him or what he can do, because…

“So do not fear, for I am with you; do not be dismayed, for I am your God. I will strengthen you and help you; I will uphold you with my righteous right hand.”
Isaiah 41:10

So here are some suggestions for you:
– call out to the Lord in this time of temptation! Pray, pray, pray.
– quote scripture! Either get out your Bible or ask Holy Spirit to bring to remembrance verses that relate to your circumstance.
– phone a trusted friend that is aware of your struggle and weakness.
– immediately change your situation. Turn around and go the other way.

The great news is this: Satan’s temporary power in this world will only last until God binds him in chains and throws him with his minion demons into the lake of fire. Then there will be no more temptation, pain, lust, pride, humiliation, aging, or death.

“And to Him (the Lord) was given dominion, Glory and a kingdom, That all the peoples, nations and men of every language Might serve Him. His dominion is an everlasting dominion Which will not pass away; And His kingdom is one Which will not be destroyed.”
Daniel 7:14

“Then the seventh angel sounded; and there were loud voices in heaven, saying, “The kingdom of the world has become the kingdom of our Lord and of His Christ; and He will reign forever and ever.”
Revelation 7:15

Food for thought: Are we allowing pride to influence our hunger or desire for something? Approval? Social status? Love from someone?

Fun facts: Cats are not evil creatures. In fact, their independence gives them the courage needed to hunt, protect, and love at any time. They sleep an average of 13-14 hours a day to conserve their energy. Their night vision sees 6x better (lower) than humans’ nighttime vision.

Photo by: Tatyana Eremina – The Face of a Cat