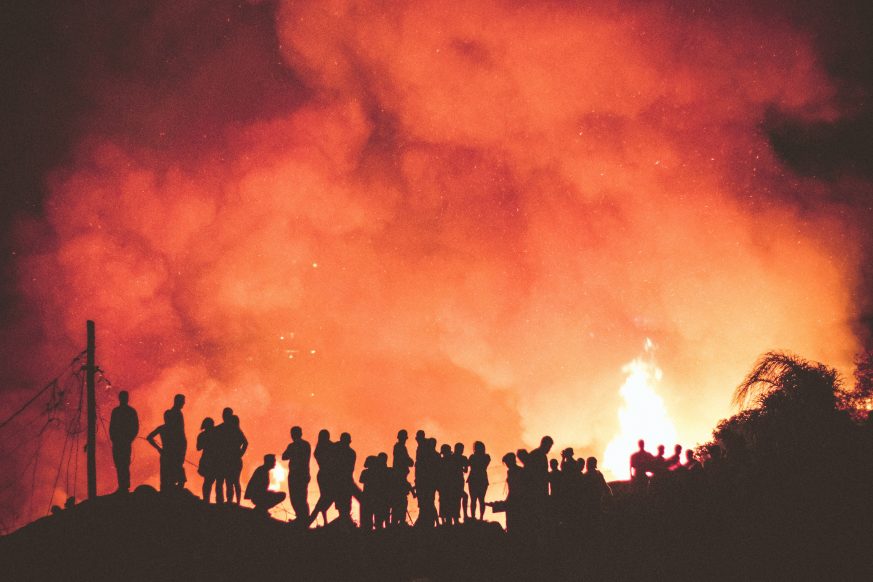 Will you spare that city for a few righteous?

The state of California is reeling from the severe pains of fire. Entire neighborhoods and even cities are being burned off the map, people are dying in their homes and cars, and it is wreaking devastation. To see the videos is truly heart wrenching! If you have family or friends that live in harm’s way, you worry about them and check in with them to be sure they are safe and OK. You pray and ask the Lord to spare your loved ones.

Abraham did the same for his nephew Lot, who was living in Sodom, a very sinful city. Abraham had given Lot the choice of where he was to live with his herds and family, since the two of them had so much, they couldn’t share the land. It couldn’t support the two men’s enormous herds of animals. Lot chose the greener grass near the Jordan River to the east, so Abraham took westerly plains in Canaan. But sadly for Lot, his choice of what he thought was the better location, wound up being a very bad decision because the 2 nearest cities were living extremely ungodly lives.

Several years later when Abraham was a 99 years old, the Lord decided to “come down” from heaven along with 2 of his angels, and they were disguised as men. He said to Abraham, “Because the outcry against Sodom and Gomorrah is great and their sin is very grave, I will go down to see whether they have done altogether according to the outcry that has come to me. And if not, I will know.”
Genesis 18:20-21

The Lord then told Abraham about his plans. But Abraham stood in front of the Lord, blocking his way, and began to counter with him about how many righteous people there needed to be for the entire city to be spared. Back and forth they went, with Abraham humbly but boldly asking and begging the Lord to save the city on behalf of just a few good men. The Lord promised to answer that prayer. As you know, Lot and his daughters and wife were the only ones spared, because there not even 5 righteous people in that whole city. THAT is very tragic. The rest were killed in judgment by God raining fire and sulfur from heaven, which caused a great smoke seen from far away.

Perhaps if we pray in unity for the state of California and its cities and its inhabitants to be spared from these ongoing fires! It doesn’t matter if this state is more liberal; they are our neighbors, and are in need of intercession and Jesus. This is our opportunity to humbly but boldly ask the Lord if he will be merciful to those on behalf of perhaps just a few righteous.

Prayer: Heavenly Father, in the name of our Lord Jesus we come boldly to your throne. We acknowledge that you are over all things and that you are mighty. We humbly but boldly ask that you spare these cities, on behalf of those few that love and serve you. We know that none of us deserve your mercy, but you are a patient and compassionate God, so we have to ask. Please don’t take out your anger on these cities in California and people die as a result. If there be only 5 righteous people in the path of these fires, please withhold your judgement. May your name be glorified as a result of your compassion. Please forgive those that fight against you, those that deny you, those that belittle your children, and grant us the same compassion, forgiveness, and understanding that you have. Thank you, Lord. There is no God like you, that listens, hears and answers our prayers. Amen.

Food for thought: Who were the righteous people that had cried out to the Lord about the cities of Sodom and Gomorrah? Was it Lot and his wife?

Fun facts: Sodom and Gomorrah were near the Dead Sea. Those said areas are to this day, littered with small white balls which turned out to be 97% pure sulfur. Nowhere else around the world is sulfur found at such a high purity level. The dark rings that circle those balls of sulfur indicate they were on fire (they can be plucked out, and set on fire quite easily, even today).