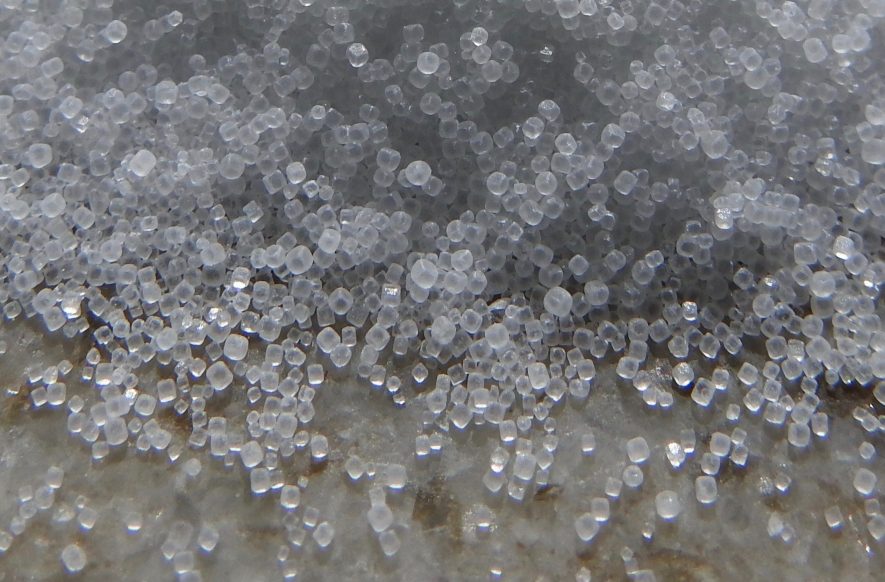 Salt versus sweet: I would pick salty foods over sweet treats any day! I crave salt. So what is it about salt that makes us desire foods with it?

Well, have you ever made scrambled eggs and eaten them without salt? Blech! They are so bland that there really isn’t even a flavor. What about potato chips? Have you ever eaten an unsalted chip? They actually do exist!

We add salt to foods to enhance the flavor. Salt strengthens what is already in the food. It allows certain molecules in foods to release into the air, thus the aroma that tickles our sense of smell. Then we taste the food, and our salty taste buds are livened as well. Salt is a simple mineral that boosts our culinary taste.

In the Bible we read about salt in both the Old and New Testaments. God wanted the grain offerings and the meat offerings to be seasoned with salt. It added to the aroma! He even speaks of a covenant of salt, with David and his sons being Kings over Israel. But then God talks about salty lands, salt pits and adds brimstone to the topic, and suddenly salt appears as a negative thing. So what’s the beef with salt? I mean, the Lord turned Lot’s wife into a pillar of salt when she looked back at the city of Sodom!

Jesus used salt as an object lesson for his disciples. He said, “You are the salt of the earth, but if salt has lost its taste, how shall its saltiness be restored? It is no longer good for anything except to be thrown out and be trampled underfoot.” To consider that salt would even get tossed out is strange since it was a highly valued commodity in those days. But, once it lost its usefulness, there was nothing more to do with it. It wasn’t even good for the soil.

How does salt lose its flavor? If it gets wet, the structure changes. The physical composition of the salt loses its chemical composition, diluting its saltiness. The other way is if your taste buds are on the fritz, and you just can’t taste salt. That doesn’t mean it is not salty, it just mean you can not appreciate or enjoy it.

So how can we lose our flavor in the world? How can we become worthless? One way is by watering down the gospel; by compromising God’s word and Jesus’ teachings to appease society. To do so is to succumb to our being bland and worthless, not set apart. We are not to change scripture or teach something that is contradictory to His written truths. Another way is by being hypocritical; saying one thing and doing another. Who is going to listen to us or believe what we say when we don’t live it? We then become a bad taste in their mouth, leading to a mockery of the kingdom of God. Jesus despised hypocrites!

How can we be the salt of the earth?
1. By enhancing others’ lives by loving them, by helping them, by truly caring and praying for them.
2. By acting as a healing agent to those that are hurting around us. Although putting salt on a wound can initially hurt, it leads to better healing.
3. By acting as a preservative for the Gospel truths and by helping preserve men’s souls.
4. Remember that salt makes people thirsty. Our lives should make others thirst for the Lord Jesus!
5. Our speech must be wholesome and gracious, as though seasoned with salt – that’s how Paul put it in Colossians 4:6.
6. By being abundant in number and readily available.

Jesus’ point was not about the salt. It was about how we live in this world. Are we enhancing others’ lives and blessing them, or are we basically good for nothing because we are not adding flavor, nor helping, nor preserving or healing, or causing thirst?

“For everyone will be salted with fire. Salt is good, but if it loses its saltiness, how will you make it salty again? Have salt within yourselves, and be at peace with one another.”
Mark 9:49-50

“Oh taste and see that the Lord is good; blessed is the man who takes refuge in Him.”
Psalm 34:8

Food for thought: How have you been enhancing other’s lives around you?

Fun facts: Roman soldiers were sometimes paid in salt, which is where the world “salary” comes from. Also, every cell in our body contains salt. Without it, we would die. Too much of it, we would die too. (But hey, our body would be preserved!)